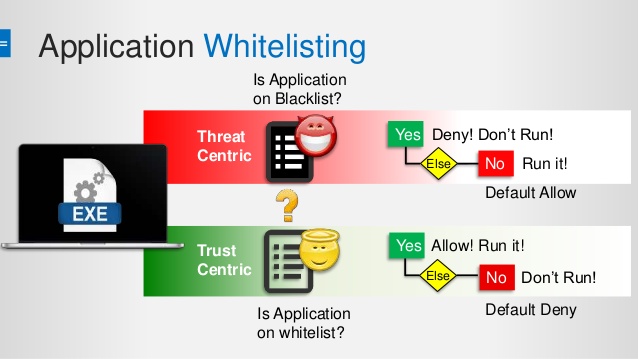 The Many Benefits to Getting New Online Whitelisting and Antivirus Applications

There are few things more important today than cybersecurity. Everyone from individuals to businesses to entire nations is in a mad scramble to protect their files and computer systems. It’s an online arms race against the hackers and virus creators of the world. One of the most important lines of defence in such an online arms race is, of course, firewalls and other standbys included in standard-issue security systems. These and other antivirus software applications work to guard your computer against any unwarranted access that might accidentally occur and that you did not authorise.

But what about when you do authorise programmes to use your computer? One of the downsides of most standard antivirus packages is that they do not account for those times when you might want a site or application to access your computer in some capacity.

It is here that the best whitelisting applications become not just essential but the next step in balancing access and security with respect to your computer usage.

One of the most important aspects of any antivirus and online defence is its centralisation. For the sake of both your computer’s protection as well as ease of use, you don’t want pop-ups and alerts from a whole host of small programmes. Instead, the best system defence applications are centralised, offering a whole host of defences against ransomware, viruses, and other cyber attacks all in one place.

What’s more, they will be able to provide you with real-time notifications about new threats to your system. It is a sad fact that such new threats are developed daily but an empowering one that the best whitelisting and antivirus programmes work to update your computer’s defences just as quickly.

A Load Off Your Mind (and Your Computer’s Memory)

Another downside to traditional types of antivirus software is the amount of space that it can take up on your computer. If you have a travel or similar type of computer or tablet especially, every last bit of available memory is precious. As such, while a whitelisting and antivirus programme or application that protects your computer is important, you likewise need enough space on your computer for it to operate smoothly and do all the things you that wish it to do.

With the latest online security applications, this problem is solved. They take up far less space than their older counterparts, leaving your computer with more memory and you with more computing freedom.

Finally, older antivirus and whitelisting services have a tendency to block too much or too little. With the ever-updatable nature of online whitelisting alternatives, you’ll be able to strike a better balance between security and access.

Compute a better, safer way today with the best new whitelisting and antivirus applications on the market today.

WeatherBug App: How To Install Weather Apps On iOS Devices